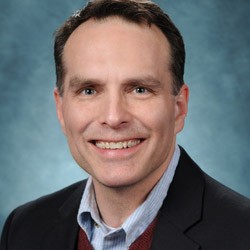 My laboratory is interested in developing new and better ways to improve patient outcomes. We pursue a discovery-driven approach to find small molecules with improved function against known targets, and we create expressed sources of molecular diversity to identify and validate novel targets.

Agonists of the beta-2-adrenergic receptor (B2AR) are critical bronchodilators in management of obstructive airway diseases, but many commonly used bronchodilators were developed before mechanisms for receptor desensitization, non-canonical signaling, recycling and degradation were elucidated. Although these drugs have improved quality of life for millions of patients, chronic use of bronchodilators (especially long-acting agonists) can increase the risk of fatal asthmatic attacks, which is why these drugs carry a black box warning. Mounting evidence suggests that non-canonical signaling, which is downstream of receptor desensitization, may play a role in the etiology of adverse events. My laboratory has discovered allosteric effectors that promote canonical signaling and suppress receptor desensitization. Bronchodilators that strongly bias towards canonical signaling should display enhanced efficacy while reducing tolerance and adverse events. We are currently evaluating and improving biased agonist candidates and allosteric modulators as part of a multidisciplinary program aimed at developing improved modalities for intervention in obstructive airway diseases. 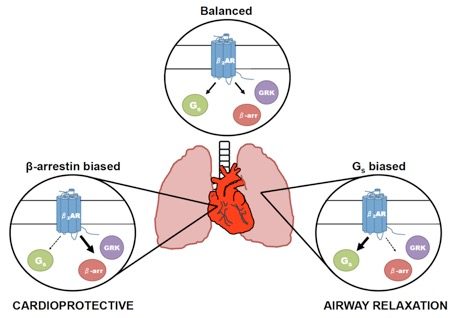 As hearts fail, adrenal glands increase production of catecholamines (epinephrine, norepinephrine) to compensate for reduced cardiac output. Unfortunately, the resulting mechanical and metabolic stress accelerates heart damage, which is why drugs that counteract catecholamine stimulation (beta-blockers) are standard therapy for heart failure. While most of these drugs compete with catecholamines for receptor binding without promoting increased heart rate or contractile force (antagonists), biased agonists that promote GRK and arrestin-mediated receptor desensitization and internalization while suppressing canonical signaling offer an alternative mechanism for beta-blocking activity that has the dual advantages of sequestering the receptor from catecholamine stimulation and promoting non-canonical signaling, which is cardioprotective. Preliminary studies with biased agonists (pepducins) that promote non-canonical signaling support their utility not only for enhancing survival of heart tissue following ischemic insult (Grisanti, et al., Theranostics (2018)), but, unexpectedly, also for preserving cardiac contractility (Carr, et al., PNAS (2016)). Considering that suppression of cardiac contractility is one of the dose-limiting deficiencies of traditional beta-blockers, beta-agonists or allosteric modulators that bias towards non-canonical signaling may offer improvement over standard of care.

Millions of infants and children in the developing world die every year from preventable diseases, despite donations of life-saving medicines. Lack of public health infrastructure in under-resourced communities leads to emphasis on oral delivery for most donated medications, but their bitter taste can compromise patient compliance, particularly in infants and children, with deadly results. Bitter taste sensation is mediated by a family of 25 GPCRs recognizing thousands of diverse molecules. This multiplicity of receptors frustrates typical strategies for developing specific antagonists. We are taking advantage of the fact that the majority of GPCR-mediated taste signaling is transduced by a single G-protein (gustducin). By developing antagonists of the interaction between gustducin and bitter taste receptors, we hope to produce agents that can function as transient, universal bitter taste blockers to improve oral medication compliance.

Exploring and expanding the druggable proteome 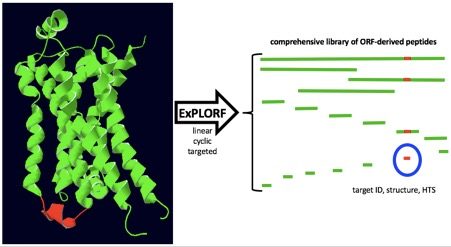 My laboratory has developed a method (Expressed Peptide Libraries from Open Reading Frames (ExPLORF)) to mine the proteome for short peptides that can be used to identify novel, druggable targets. Inverse PCR is used to diversify open reading frames into comprehensive libraries that express every constituent peptide (six amino acids or greater) derived from a candidate open frame. Libraries can be expressed as linear or constrained peptides in the cytoplasm or directed to intracellular compartments. Minimal sequence elements that promote a phenotype of interest are enriched from expressed peptide libraries, and enriched sequences are used as biochemical probes to isolate druggable targets. B2AR is an ideal model system to develop ExPLORF since peptides and pepducins derived from B2AR have been reported to promote signaling bias, and our canonical and non-canonical HTS platforms are equally amenable for FACS enrichment of single cells that express therapeutically interesting clones. Our long-term goal is to empower crowd-sourcing of probe discovery and target validation and catalyze ORF by ORF interrogation of the druggability of the human proteome by harnessing the evolutionarily optimal source of molecular diversity for pharmacologic validation of human targets through an affordable method built upon a molecular biology platform with which the majority of biomedical scientists are familiar and comfortable.