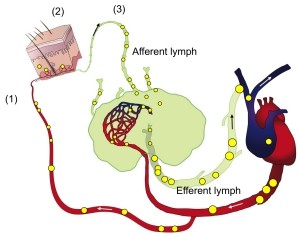 Our research seeks to advance understanding of pro-and anti-inflammatory lymphocyte subsets that recirculate through extralymphoid tissues with the goal of defining novel approaches to manipulate tissue infiltrates in inflammation, infection, or cancer. Our current main focus is on the skin, which is a barrier organ constantly threatened by external insults ranging from UV and chemical insults, to insect bites and various infectious agents. The skin is also the frequent target of immune insults such as allergies and autoimmunity as well as a common site of cancer. Therefore, mobile and resident cells of the skin immune system are charged with maintaining a delicate balance of defense, repair and limiting overt inflammation. We are focusing on three main areas to advance our understanding of cutaneous immunity and inflammation. We analyze trafficking of T and B lymphocytes into and out of the skin, the subsets and function of pro-and anti-inflammatory cutaneous lymphocytes, including that of less well-defined lymphocytes, such as B cells and NK cells (Figure 1). All of these areas are potential therapeutic targets in cutaneous pathologies.

Trafficking of Regulatory B cells (Bregs) into skin 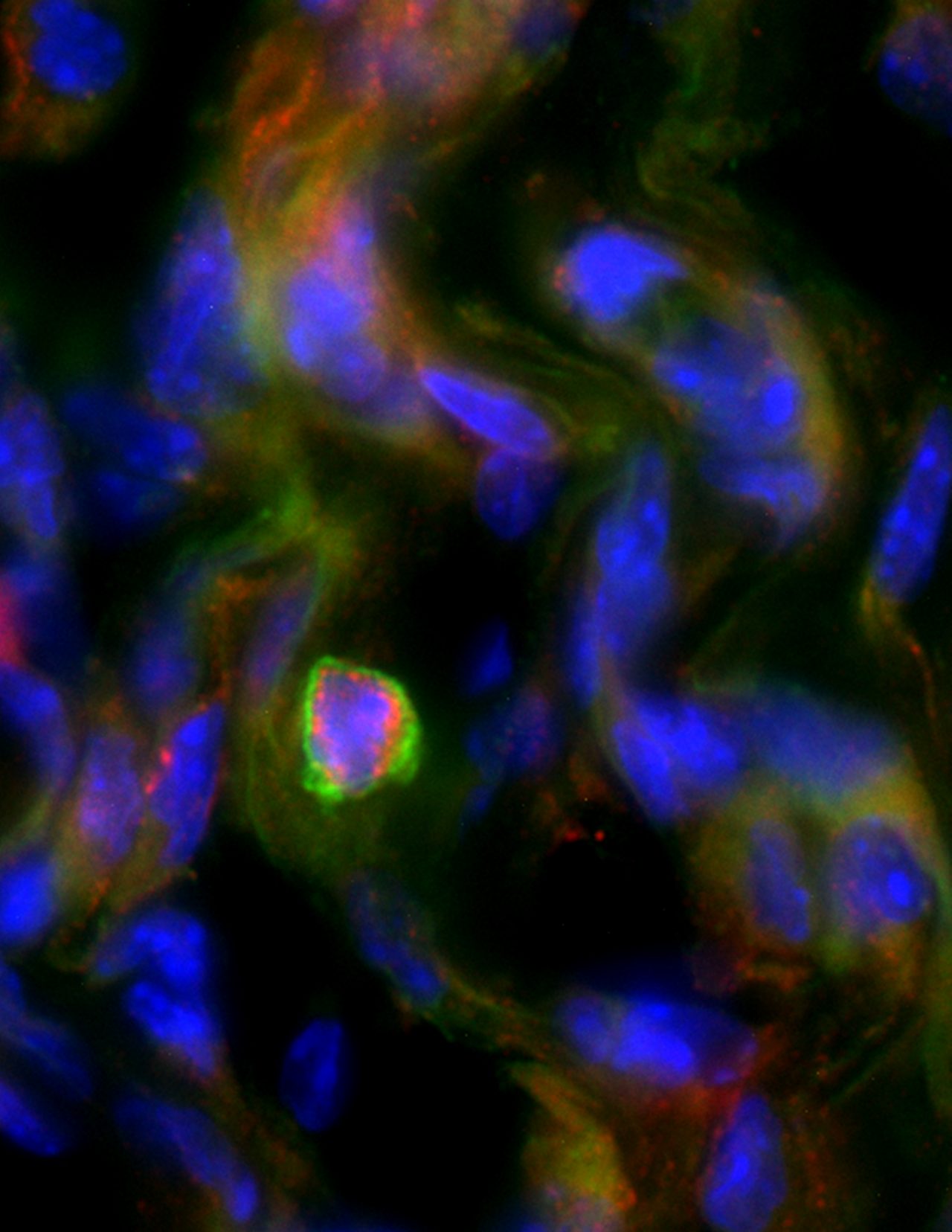 Regulatory B cells (Bregs) are immunosuppressive cells that control inflammation and maintain tolerance. Bregs are important in the regulation of various clinical settings ranging from inflammation in autoimmunity, transplantation, to cancer. A major function of Bregs is the production of anti-inflammatory cytokines, such as interleukin (IL)-10, IL-35, and tumor growth factor (TGF)-β, which suppress a variety of cell types. There are three major B cell subsets: follicular (conventional), marginal zone (innate-like), and B-1 B cells (innate-like), but the developmental origin, phenotype and maintenance of Bregs in the context of these subsets is still unclear.

Changes in peripheral Bregs can be involved in a number of human skin pathologies, such as pemphigus and psoriasis. In mouse models of psoriasis and cutaneous hypersensitivity, IL-10⁺ Bregs limit skin inflammation. However, the anatomical location and target cells of Bregs that suppress cutaneous inflammation are unclear. Our lab has revealed that IL-10⁺ innate-like Bregs localize to skin of humans and mice (Geherin et al., 2016) (Figure 2). We also found that peritoneal IL-10⁺ B-1 cells, which can act as Breg, preferentially migrate into the inflamed skin (Geherin et al., 2016). Based on these findings, we hypothesize that Bregs suppress skin responses from within the cutaneous environment and that IL-10⁺ Breg migration into inflamed skin limits cutaneous inflammation.

To test this hypothesis, we are working with a mouse model of the skin disease psoriasis. Topical application of imiquimod, a TLR7/8 ligand, on the shaved skin of mice induces an inflammatory skin response, which mimics the main characteristics of human psoriasis. We are currently assessing the kinetics and role of IL-10⁺ Bregs infiltrating into psoriasis-like skin. Our initial studies found that both the percentage and the number of IL-10⁺ B cells increased in the skin during the course of inflammation. Additionally, we found that innate-like Bregs require α4β1-integrin for homing into skin (Geherin et al., 2016), and we are currently identifying additional homing molecules used by Bregs to travel into inflamed skin and other sites. We predict that blockade of Breg skin homing receptors will prevent trafficking of Bregs into skin and psoriasis will be exacerbated, which we will assess through clinical parameters such as transepidermal water loss, moisture content, and erythema on the affected skin.

Moreover, our preliminary data show IgM secreting B cells in the skin of mice and humans, revealing a potential role for localized antibody production in host defense and inflammation; and in addition, secretory IgM deficient mice secrete more IL-10 and have more Bregs compared to WT mice. Thus, we hypothesize that after imiquimod-induced psoriasis-like inflammation, an improvement in the resolution of skin inflammation will be observed in secretory deficient IgM mice.

It is our goal to understand the role of IL-10⁺ Bregs in modulating skin inflammation which will inform design of improved therapies for patients with skin diseases and may translate into therapies for skin infections and cutaneous malignancies.

Secreted IgM and the Regulation of IL-10+ B cells

IL-10+ regulatory B cells (Bregs) are increasingly recognized as critical components in maintaining immune tolerance. Bregs primarily act by the production of the immunosuppressive cytokine IL-10 and are found in multiple subsets of B cells. Alterations in the Breg population can have detrimental effects in human diseases including infections, cancer, autoimmunity and inflammation; however, the signals that control Breg differentiation are not completely understood. 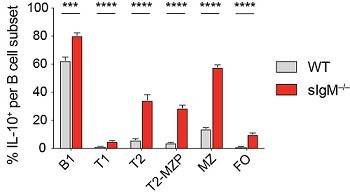 Our lab has recently found that mice incapable of secreting IgM, sIgM-/-, have significantly increased frequency and number of IL-10 producing splenic B cells compared to wildtype mice. (Figure 3) This IL-10+ Breg population is increased within all of the major B cell subsets: B-1, follicular (FO), marginal zone (MZ), T2-marginal zone precursors (T2-MZP), and transitional B cells (T1 and T2). (Figure 4) We have found that the increase in IL-10+ Bregs is due to the absence of circulating IgM and is not an intrinsic effect due to the inability to secrete IgM.  We hypothesize that secreted IgM acts upon receptors on B cells to regulate their ability to produce IL-10.  We are currently assessing the role of multiple IgM binding receptors in controlling IL-10 competence. We are also investigating if the increase in IL-10+ B cells is a mechanism to restrict autoimmunity in the absence of IgM.

Tissue-selective B cell subsets in sheep

Lymphocyte recirculation patterns are key indicators of organ-specificity and reveal the degree of selectivity with which a lymphocyte can be targeted through its migration. This forms the basis for successful therapeutic approaches (e.g. vedolizumab targets α4β7 integrin on gut-homing lymphocytes. The sheep lymph cannulation model is unique in its utility to analyze lymph-borne cells from specific extralymphoid tissues, such as the skin, which is not feasible in rodents or humans. The model has led to key discoveries and will allow us to identify distinct B cell subsets that preferentially return to skin (skin-selective) or that are ubiquitously homing and lack skin preference.

The skin is a critical barrier organ and frequent target of immune-mediated pathologies. Cells of the skin immune system regulate local defense and suppression of inflammation.  Long accepted dogma asserts that B cells do not reside in uninflamed skin, and this reflects an almost complete lack of knowledge regarding the subsets, function and trafficking of skin-associated B cells. Using afferent lymph cannulation in sheep, we discovered that B cells constitutively recirculate through skin. Our follow-up studies found that innate-like IL-10⁺ regulatory B cells (Bregs) preferentially migrate into the inflamed skin of mice and that Bregs as well as other B cell subsets reside in human skin. Moreover, our preliminary data show IgM secreting B cells in the skin of sheep, mice and humans, and reveal a potential role for localized antibody production in host defense and inflammation.

Our data in sheep indicate the existence of potentially skin-selective B cell subsets that may use cutaneous lymphocyte antigen (CLA/E-selectin ligand) and chemokine receptor CCR4 to home into skin (Figure 5). In contrast, we found that Breg trafficking into skin is independent of canonical skin-homing receptors and requires α4β1-integrin. Together, the data suggest that different B cell subsets may use distinct mechanisms to enter the cutaneous environment. 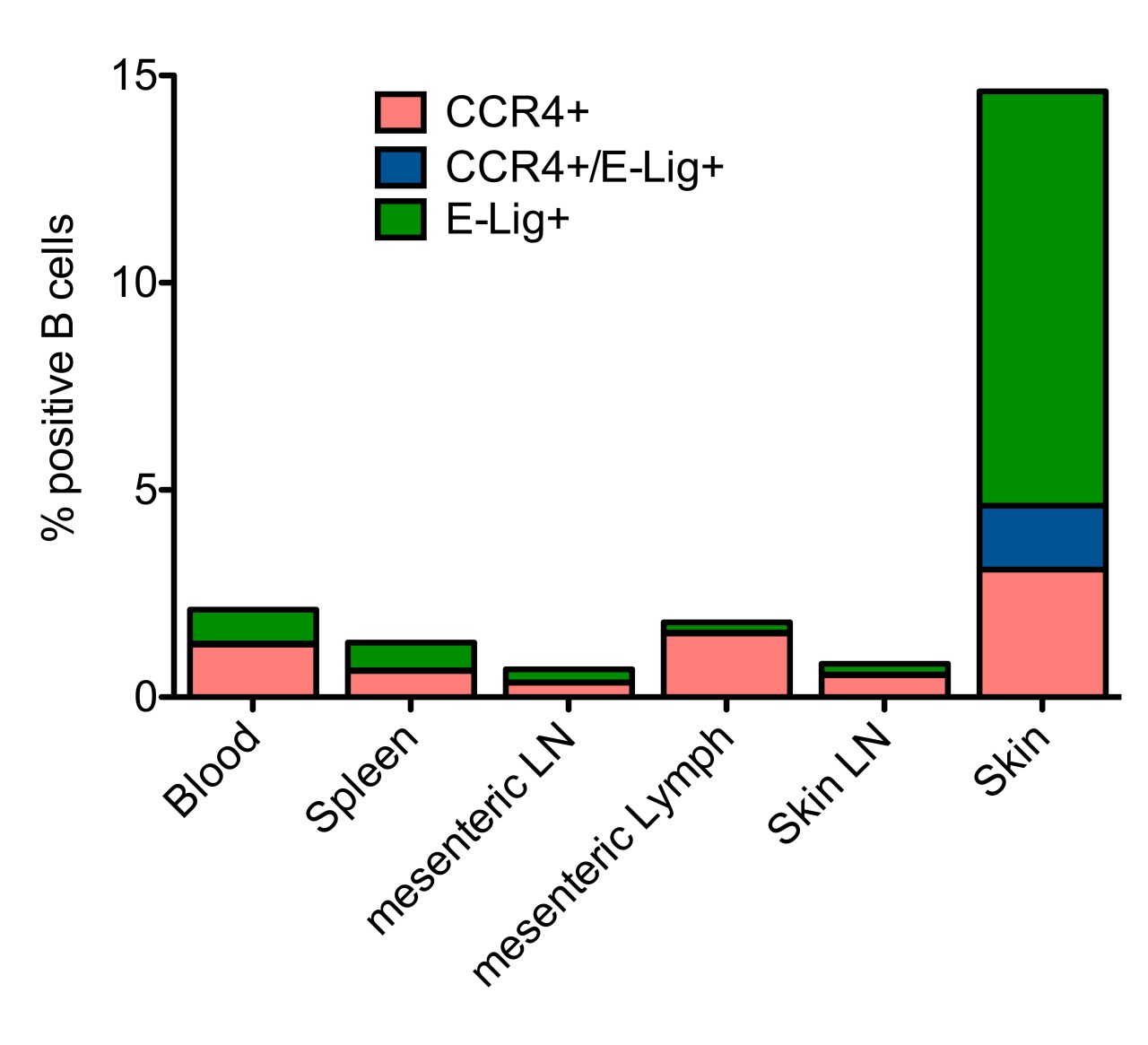 We hypothesize that Bregs and other skin-homing B cell subsets fulfill specialized roles in the modulation of skin inflammation and host defense and that they can be targeted through their migration.

Under this project, our studies in sheep are focused on defining the B cell subsets that travel to skin. In addition, we are investigating the localized function and trafficking receptors employed by distinct skin-homing B cells. We are using afferent lymph cannulation and traditional recirculation studies combined with RNA-seq and multi-color flow cytometry.

Knowing the routes of recirculation and the trafficking receptors employed by distinct skin B cell subsets as well as their effector functions will allow us to manipulate the localization of pro- and anti-inflammatory B cells therapeutically. 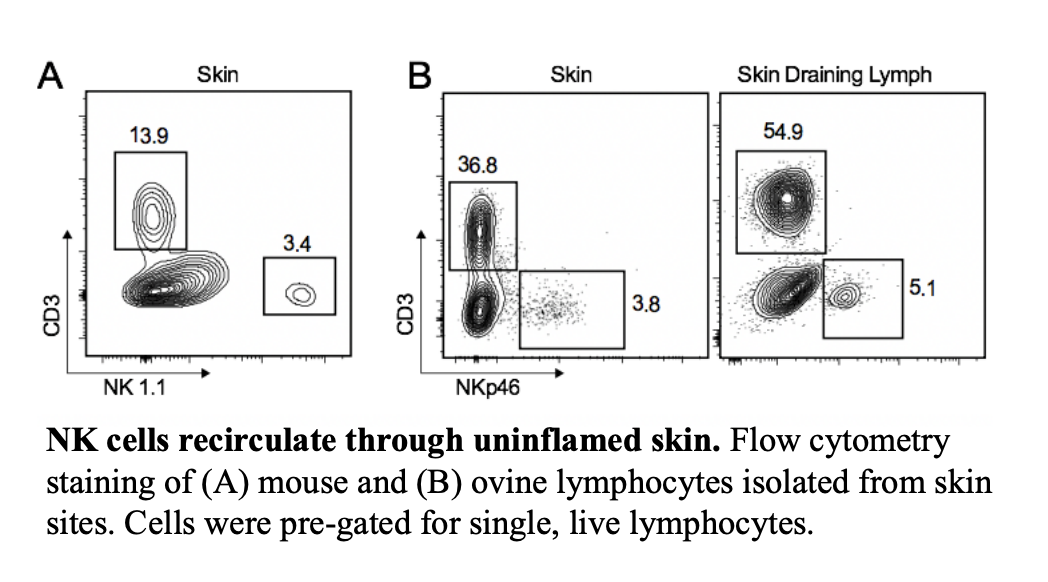 Natural killer (NK) cells are key effectors of the innate immune system, but despite their importance in shaping the immune response, little is known about their tissue-specific function and behavior. While accumulating evidence suggests a role for NK cells in enhancing autoimmune inflammation in the skin, the function of skin NK cells and the molecules that control their migration remain poorly understood.

We are seeking to understand the function of skin NK cells and molecules that govern their migration patterns.  Leveraging our laboratory’s expertise in skin-recirculating lymphocytes, we employ the powerful model of afferent lymph cannulation in the sheep (Geherin et al., 2012, 2013), in addition to traditional mouse models of skin inflammation and homing. Our studies found that NK cells consistently comprised 3-8% of lymphocytes in skin and skin-draining afferent lymph of sheep and mice (Fig 6A and B). A cell cluster of skin-recirculating NK cells can also be identified using single cell RNA-sequencing of afferent lymph cells draining the skin based on expression of typical NK expressed genes (CD94, KLRs, FCER1G)(Fig 7). We conclude that NK cells constitutively recirculate through skin. 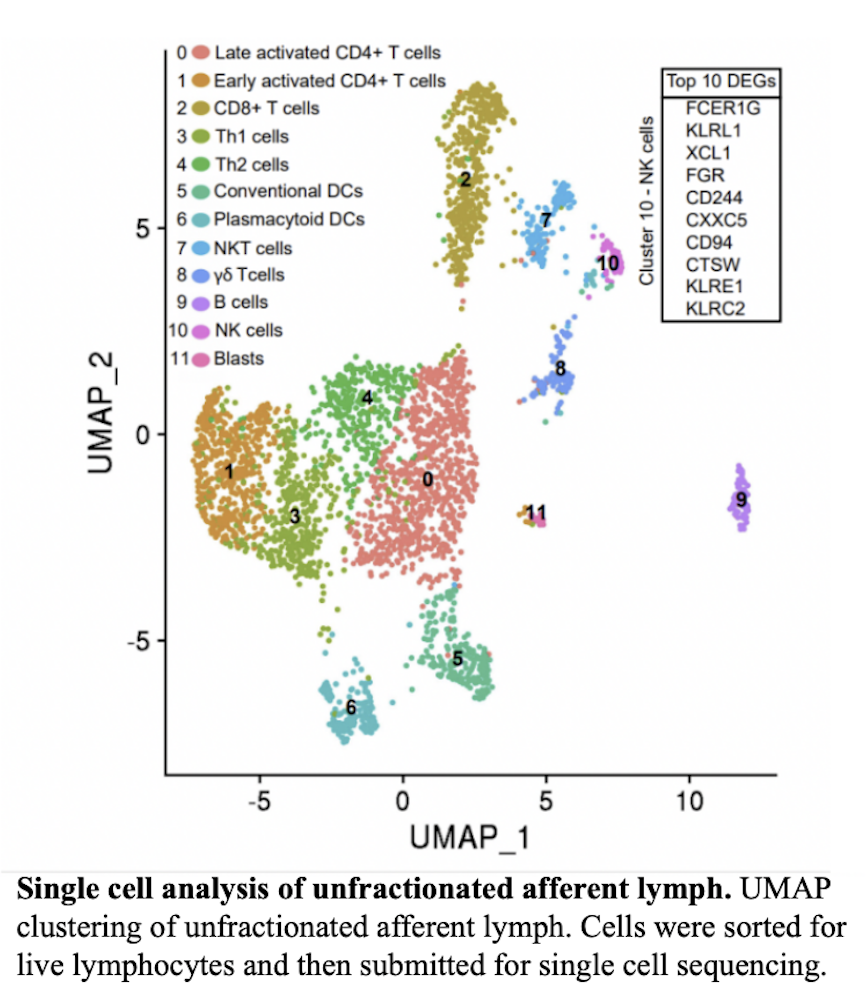 Currently, we are performing single cell RNA-seq analysis to determine the specific transcriptomic signatures of skin-recirculating NK cells relative to that of their counterparts at distant sites. By comparing NK cells in skin-draining afferent lymph, blood, and mesenteric lymph, we hope to discover the unique signatures of NK cells circulating through different sites. We hypothesize that a distinct population of skin NK cells exists, with little to no overlap with gut NK cells. that blood NK cells contain the highest variety of NK cell clusters that overlaps with skin and mesenteric lymph NK cells. In contrast, we predict skin and mesenteric NK cells will contain distinct populations.

This project will help to elucidate important tissue homing mechanisms used by NK cells, and ultimately establish whether they can be targeted therapeutically in inflammation, infection, or cancer.

Signals that mediate T cell retention in vs. egress from the effector site during inflammation.

Studies are underway to reveal the mechanism by which different chemoattractant pathways regulate T cell egress and retention over the course of inflammation. Follow-up studies will also validate whether specific exit receptors can be targeted for therapeutic purposes during inflammation or infection.