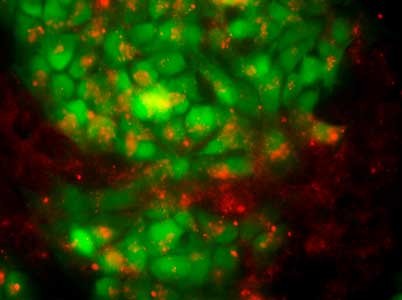 Breast cancer preferentially metastasizes or migrates to the bones, where the five-year relative survival rate is less than 10%.  Metastatic lesions are thought to originate from disseminated tumor cells (DTCs) shed from a primary tumor.  Clinical evidence suggests that, upon entry in a secondary niche, DTCs undergo proliferative quiescence for a period of up to 25 years, where they are capable of escaping immune surveillance and evading chemotherapeutic agents which target cycling cells.  As a result, breast cancer patients successfully treated for primary breast cancer decades before suddenly develop overt macrometastases without prior symptoms.  This latency period before relapse at a secondary site can be defined as metastasis dormancy.  Thus, there is a critical need for elucidating the molecular mechanisms facilitating breast cancer dormancy and reactivation in the bone such that preventative therapeutics can be developed.  Despite the high prevalence of dormant tumors in humans, this area of cancer research is poorly understood and understudied.  The Bussard laboratory studies how specific interactions between normal bone osteoblasts and breast cancer cells facilitate and maintain breast cancer cell dormancy in bone.

Research Focus:  The focus of research in the Bussard Laboratory is two-fold:

The goal of the first project in the Bussard Lab, supported by a R00, is to identify novel mediators which orchestrate disseminated breast cancer cell dormancy in the bone microenvironment (Figure 1).  As a way to test this, we examine the roles of gap junctions and exchange of microRNAs between osteoblasts and disseminated breast cancer cells as modulators to this process.  We have used three different models: cell culture, long-term three-dimensional culture, and animal models to study these interactions.  We have found that osteoblasts form gap junctions with metastasis-suppressed breast cancer cells, which may contribute to cellular crosstalk between the two cell types.  Bone osteoblasts were also found to produce exosomes which contain exosomal microRNAs found to be involved in cell cycle control and cellular dormancy.  These osteoblast-derived exosomes were taken up by breast cancer cells in a co-culture setting. 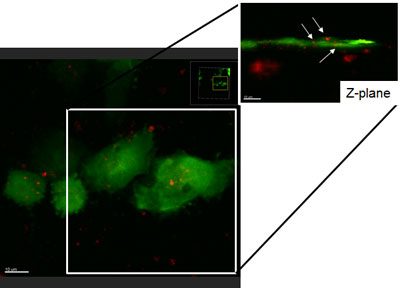 Combined, these data suggest that there is extensive crosstalk between osteoblasts and disseminated cancer cells in bone, and highlights the importance of investigating osteoblasts as key players which mediate cancer cell proliferative quiescence in bone.